Just added for Free Comic Book Day, next Saturday - May 3. Meet independent comic writer - Eric Berry, creator of Sporkman. Come and get a Sporkman comic and learn who the heck Sporkman is. Meet Eric at around noon on Saturday until 2 or 3 on Saturday. 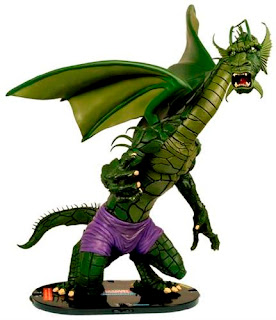 Details:
600 points, UNRESTRICTED, NO bystanders, NO Battlefield Conditions, NO feat cards. Each map will use 4 LIGHT and 4 HEAVY objects instead of the normal amount. No Spectre, Galactus, or Foom figures may be played. Each round will be 45 minutes (total rounds to be determined by attendance).

Winner will be determined by total points (not WINS/LOSSES). Winner gets a Foom ($90 value). Runner up gets the CONVENTION EXCLUSIVE MIGHTY THOR LE figure ($20 value).

The Pennsylvania Star Wars Collecting Society will be presenting a collecting panel entitled "Star Wars Collectible Mania!" at the Franklin Institute in Philadelphia, PA on Thursday, April 24th at 7:00pm. The Franklin Institute is currently hosting the traveling exhibit "Star Wars: Where Science Meets Imagination" and invited PSWCS to host this panel to enhance the Star Wars experience at the museum.

Five members of PSWCS will share their passion and expertise in Star Wars collecting, and will display an assortment of their collectibles for your perusal. The event is free, but if you'd like to attend, the Franklin Institute asks that your register ahead of time, as seating is limited.

Top 30 Subscribed to Comics at CSW as of April

Just wanted to let everyone know what has been happening in our local Warmachine and Hordes community.

On March 29, we had a tournament with 6 players trying out the not-yet-official tournament rules from Privateer Press. Pewter was flying across the table as the competitors tried to get their turns completed in the alloted 8 minutes. After a game of frenzied play, we all agreed that 8 minutes might be a bit too fast for now and changed the limit to 10 minutes. Games still progressed quickly but the danger of cardiac arrest greatly subsided. In the end, Mike Stephens stood victorious as his undead legions snagged both the best of Cryx and Champion awards. Dave Gentzler, also playing Cryx, took home the award for Best Painted Army.

On April 4th, a dry, howling wind ripped through Comic Store West as the Bloodstone Borderlands Tour of the 2008 Call To Arms League kicked off with a bang. By the end of the night, 15 players had played 9 games in the unforgiving land separating Western Immoren from the wasteland of the Bloodstone Marches. Dust storms, scalding hot geysers and aggressive cacti made a memorable night for all. If you haven't signed up yet there are still 4 weeks and several player slots open. 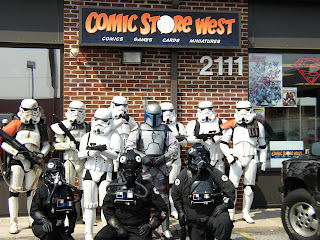 Free Comic Book Day is quickly approaching. Come in and join the fun. We have tons of different free comics for everyone. As in the past we ask that each person take 1 FREE comic and then make a small 50 cent donation to the Martin Memorial Library for every additional FREE comic book. There will be HUGE sales all day, Stormtroopers from the local 501st garrison will be on hand for photos. The stormtroopers will be collecting toys (they prefer Star Wars toys) for their local charity.

At the Kenpo Karate school, beside us, will be karate demos they will be collecting for St Jude's Children's Hospital.

Check back here for more info.