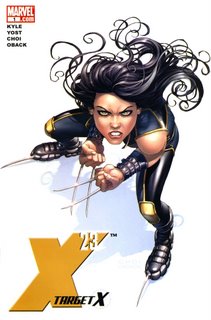 X-23 Target X #1
The Story: Because you demanded it! Superstar Top Cow artist MIKE CHOI joins the team as X-23 returns, picking up the bloody pieces where her first mini-series left off. Having escaped the Facility that created her, X-23 struggles to create a real life for
herself. But when your entire life has been about death and destruction, can you ever really escape the darkness? The rest of the story begins here, and won’t end until X-23 faces off with the one man most responsible for her life... WOLVERINE.
ON SALE NOW

Are you looking for HeroClix Zombie Stats?

I wanted to make my own HeroClix Zombie cards since I was only lucky enough to score one Marvel Zombie so far but WizKids does not have the stats and card images online. After doing some digging I finally found a link to the card images and the figure stats so you can make your own custom Marvel Zombies.

Link to images of the HeroClix Marvel Zombie cards and figure stats.

New Universal #1
The Story: Planet Earth. Inhabited by six billion people. People leading ordinary lives, coping with everyday struggles. But on a night like any other, the Earth is rocked by the most startling celestial event ever witnessed by the human race. The White Event. And from its wake, a handful of humans emerge as something more.
Acclaimed writer Warren Ellis (NEXTWAVE) and superstar artist Salvador Larroca (X-MEN) bring you this new universe - a universe witnessing superhuman power for the first time.

Spider-man: Reign #1
A searing vision of Spider-Man's future, brought to you by superstar Kaare Andrews (INCREDIBLE HULK).
They finally did it. Kicked them to the curb. The "capes and tights" crowd -- there's no place for them in the Big Apple anymore. Peter Parker? He can't even remember what it was like to don the red and blue and swing through the night sky. Doesn't want to, anyway. After all, there's nothing left to fight for, is there? That is until an old "friend" appears on Peter's doorstep, bearing a package and a message -- and everything changes. If it's not Peter's responsibility, then whose is it?

Ultimate Vision #1
Picking up directly from the events in the smash hit limited series Ultimate Extinction! The Earth was saved from the Ultimate threat-Gah Lak Tus. But scientist George Tarleton has captured a piece of that awesome entity and plans to reactivate it for his own evil purposes. The only hope for mankind against this mad scheme-the strange alien being called The Vision!

Batman Confidential #1
Learn where the Dark Knight first got "all those wonderful toys" as the superstar combo of writer Andy Diggle (ADAM STRANGE) and art team Whilce Portacio and Richard Friend (WETWORKS) go back to Batman's roots in a new monthly series! In this 6-issue tale, see exactly when Batman's war on evil in Gotham City ramped up — and how he rose to meet the threat of Lex Luthor's plans to move in on both Bruce Wayne's and Batman's turf!

Justice Societ of America #1
Get in on the ground floor as the world's first and greatest super-team returns to usher in the DCU's next age of heroes and villains! Writer Geoff Johns (52, Infinite Crisis), artists Dale Eaglesham (Villains United, Green Lantern) and Art Thibert (Outsiders, Superman) and cover artist Alex Ross (Kingdom Come, Justice) band together for the debut of the greatest incarnation of the super-team that inspired all the others.

Determined to rebuild the Justice Society, founding members Green Lantern, Flash and Wildcat initiate an unprecedented recruitment program, tracking the bloodlines of heroes across the world and bringing in the new Starman, Damage, Liberty Belle and more!

But just as the Society welcomes the rookies into their ranks, an evil force sets out to destroy them. Meet new legacies, solve a mystery stretching into the far future, witness the return of the world's greatest hero, and watch another one fall - all in the pages of this fantastic new series!