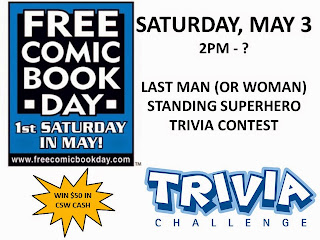 And now, here are the final few comics that you can pick up tomorrow:

Guardians of the Galaxy

A new, in-continuity story by Brian Michael Bendis that sees the Guardians get a new member. There's also a preview of Thanos: The Infinity Revelation graphic novel that's coming soon, as well as the first look at the big Spider-Verse event, which will involve every Spider-Man ever. This is a winner!

You get two stories in this book: one about Scrooge and Donald having their gravity realigned, and the other about Donald trying to throw a birthday party for his lucky cousin Gladstone. Note that there are two covers for this book, but the stories inside are the same: no need to get them both unless you feel like it.

Creator Ed Piskor draws a parallel between the rise of hip-hop in the '80s and the birth of comicbooks, and he seems to have a point. This comic reprints two stories from Vol. 1 and 2 of the book series, and will make you want to listen to the music as you read it.

The Tick: always funny. This one plays with the familiar old trope of shrunken cities in bottles, and features a back-up story with Santa Claus. Plus, if you've missed any of the previous years' FCBD Tick issues, this one has instructions on how you can order them!

The young magician returns, and this time she's made a new friend at school - one who doesn't mind that Courtney is the "weird" kid at school. This is kind of like an all-ages version of Hellboy, what with the goblins and pixies and whatnot. And who doesn't like a protagonist who refuses to fit in?

This book from the Comicbook Legal Defense Fund opens with a retrospective on Frederick Wertham, showing that there's more to the guy behind Seduction of the Innocent than his attempt to ban comics (but why that's all he's known for). That's just the opening though, and there are more fun anti-censorship stories behind that

As the polar ice caps melted, a long-dormant virus was released: one that turned a small percentage of infected into vampires. Mankind tried to fight back, but the disease kept spreading, and now it's full-on war. This comic serves as an introduction for the upcoming V Wars series, so this will let you get in on the ground floor.


So that's it for this year's 50+ free comicbooks and magazines. We've helped you count down the days to FCBD by offering these brief reviews, and now tomorrow you can come in and get all the ones that sound interesting. We may even have leftover books from previous years too, and they'll be just as free as this year's. You can surely find something fun and exciting this Saturday, to say nothing of the sales, contests, and events we're having all day long.