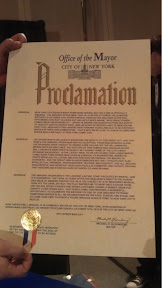 On the train up to New York Comic Con, after over an hour of playing HeroClix TabApp (I've finished the Captain America and Iron Man levels so far) I decided to read about what's been happening at the con today.

Apparently Sunday has been proclaimed Spider-man Day in New York, in honor of his 50th anniversary. Not quite sure how DC feels about that but it should bring even more press to bear on the Javits Center.

Anyway, pulling in to station now. Check back here through the weekend for updates from the con.

- Posted using BlogPress from my iPad