Do you know Rocket Raccoon?

Marvel Comics certainly wants you to. 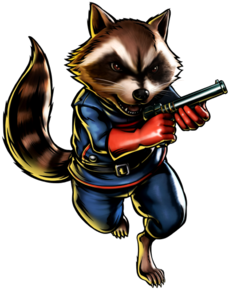 Rocket Raccoon was introduced in 1976 as a genetically engineered companion for the mentally ill patients of an interstellar insane asylum. Seriously. He's teamed up with Hulks of both the "Incredible" and "She-" varieties, and even led the Guardians of the Galaxy team when Star-Lord was unavailable. Also, his creation was influenced by a Beatles song:


Crazy as it may seem, Marvel really is plunging ahead with a Guardians of the Galaxy movie (a well-known actor is already angling for the Rocket role), which means that we're going to see Rocket Raccoon in a live-action film before DC can even figure out how to make Wonder Woman work. And before that happens, Marvel is really pushing to make sure everybody knows and cares about the little guy.

He's all over the comics, of course, but he's also been an action figure, was a playable character in a videogame, appeared on an episode of the Avengers: Earth's Mightiest Heroes cartoon, and is available on all sorts of merchandise - including this mug that is available for sale exclusively at New York Comic-Con, happening October 11-14. 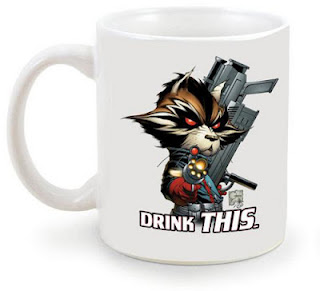 Interested in a Rocket Raccoon mug of your own? We will be going to NYCC next week, so stop in today and ask to see the preorder binder: sign up and we'll bring one back for you. The same is true for the other NYCC exclusives, as well - they're all right there in the binder.

If you want to get to know Rocket Raccoon from the beginning, 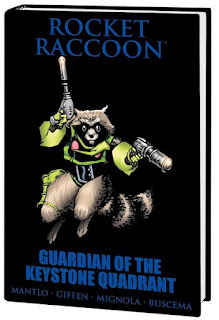 we also have the Rocket Raccoon: Guardian of the Keystone Quadrant hardcover collection in stock. It reprints all his classic appearances:


Can you believe that's Mike "Hellboy" Mignola's art on the cover? He was the artist for Rocket's eponymous miniseries, so this is an opportunity to see early work from one of today's most recognizable artists. When the Guardians of the Galaxy movie opens in 2014, everybody is going to know Rocket Raccoon - this book is your opportunity to say you knew him first. And don't forget the trade paperbacks of the "Annihilation" crossover, which rescued Rocket Raccoon from limbo - we have those in stock, too.

And this Wednesday, during the Uncanny Avengers launch party, we'll be giving away buttons featuring pieces of Joe Quesada's "Marvel Now" promo artwork: you can get Wolverine or Iron Man, or a super-rare chase pin featuring - who else? - Rocket Raccoon! If you want one, come in early, because they're sure to go fast.